Transforming at risk youth, throw aways, gang members and drug addicts is what Firehouse Community Development is known for. Drs. Sonny Lara and Linda Lara knew unless someone intervened with these type of young people they would be handed a death sentenced or life imprisonment. Unless someone stepped in a detoured them from this type of lifestyle this would be their fate.
With this in mind, the Firehouse set out to rescue and save the worst of the worst. Those who nobody thought could be saved. Those, who all hope of any type of turn around seemed impossible. Their only hope of survival would be for them to escape a bullet or never get caught by the police for doing a violent crime. These are the type of youngsters that Firehouse sought out to bring hope.
Drs. Sonny and Linda knew the first step in doing so was to establish a safe haven for these youth. A place where they would feel welcomed and accepted. A place where you weren’t looked down on or discarded as unworthy because of the neighborhood you came from, the clothes you wore, the tattoos on your body or the amount of income your parents made. Where youth felt valued and accepted.
So believe it or not a “hand shake” is what opened the door for Firehouse to begin this task. A hand shake of warmth and love for each and everyone that we encountered. Soon the trust between Firehouse and the youth was established. They began to open their hearts and we were able to come in and bring hope.
We then began the Firehouse School Program. Four or more F’s, a low GPA, truancy and disciplinary issues was and continues to be the criteria for entrance into the program. This program is not for the valedictorian, on the contrary. There are enough programs for them. It is for those who are failing in school and life, and need guidance to get back on track. At Firehouse we believe every life has value and that includes the worst of the worst.
We know that if we had the opportunity to encourage, empower, enlighten and speak life into these youngsters they would succeed. Four days a week we are on school campus. Allowing students with four F’s or more come to our program to receive help.
We are only funded to take case loads of forty students, but we had over a hundred students wanting to get in the program. There was no way we could turn any of them down even though we knew we would not receive any funding for them. We were overwhelmed by the response and knew we had the opportunity to transform their lives.
We have now seen such great transformation in these young people. They have gotten their GPA’s from 0.2 to some as high as 4.0. Yes 4.0! And now being accepted at colleges and universities.  We are so proud of our students who have completely turned their lives around. Off drugs, out of gangs and out of trouble. They are now working and going to school. We give God all the Glory for we know it is Him that has made all this possible.
Written by Dr. Linda Lara

Posted by Ambassador Clyde Rivers at 3:25 PM No comments:

As statesmen, we are given the mandate to create cultures of peace, goodwill and honor through the power of effective nation building dialogue. Our ability to converse carries the potency to affect lives either positively or negatively. Thus, our dialogue must edify, comfort and encourage others to reach their maximum potential. Through building others, we will build our communities, cities and nation by touching one life at a time.

Thus, we are responsible to influence others through the power of our spoken words. The first thing we must do is to recognize that we must treat others the way we want to be treated. This requires that we must speak with others the way we want others to speak with us. When we apply this golden-rule principle, it will change the way we converse with others. We will bring healing and restoration to those who are discouraged, hurt and in despair. We will be builders of our nation through building lives with our words.

The second thing we must do as statesmen is to recognize that every life is a gift and is valuable. Despite the setbacks, mistakes and the present circumstances, every life carries value. It is our responsibility to look beyond what we see and recognize the value every human life carries within them. We must utilize the power of dialogue and awaken the dormant gifts, talents and abilities in others. Then, through encouragement, we must assist others to realize the greatness within them.

The third thing we must do as statesmen is to invest in building minds to think great and become solution oriented. A great nation invests in great minds who are thinking bigger and greater than even their present circumstances. Great minds are seeking solutions and are solution-oriented people who refuse to give up. They are constantly speaking positively even when they are surrounded by negative conditions around them. They are strategically planning great things and refuse to conform to smallness and limitations. Thus, as we invest in thinking big, we will solve complex problems and unlock answers and solutions. We will make our world a better place through our positive contributions.

The fourth thing we must do as statesmen is to continually show others respect and honor. We must live a lifestyle of honor and express the spirit of honor through our dialogue with others. Thus, we will influence others to do the same; leading to creation of communities of honor. Our dialogue will be seasoned to cultivate goodness, goodwill and peace in our nation.

Dr. Eric Melwani is a Golden Rule World Peace Ambassador and a Statesman with iChange Nations™. He travels around the world with the message of the value of life and the Golden Rule. He also pastors the Church of Many Waters in Orlando, Florida with his wife Dr. Janet Melwani.

Posted by Ambassador Clyde Rivers at 8:00 PM No comments: 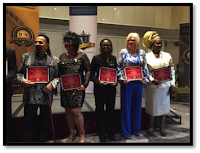 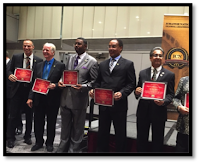 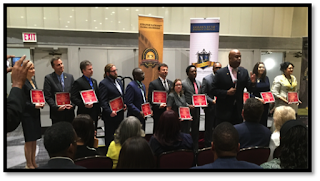 Dr. Clyde Rivers, Founder and President of ICN, With the Degree Recipients


IChange Nations™ has a philosophy: People found doing practical work worthy of acknowledgement and exemplifying the wisdom and skill of a true statesman need to be recognized for their successful efforts. There are some things that cannot be learned from a book. The experience of using life and integral leadership skills to further the advancement of people around the world is found to be a valuable tool in aiding mankind to find a better way of life. When this caliber of individual is discovered, IChange Nations™ feels it is important to formally recognize their hard work by award ing them a non-academic ICN National Statesman Degree.

For the first time, ICN was able to award many deserving recipients this degree on April 23, 2016. These people, desiring to change the world for the better, came to Capitol Hill in Washington, D.C., to receive this prestigious award in full view of the world. The fifty nations represented championed these worthy individuals.

Dr. Clyde Rivers, Founder and President of IChange Nations™ said, “I am very impressed by the people that are coming into our ICN network.  These individuals have far surpassed the status quo in the world.  They are leading the way in new and exciting pathways of  innovation to empower people across the globe.  IChange Nations is honored to name and award these individuals and embrace their work.

IChange Nations™ is a professional organization that builds statesmen by equipping, mentoring, and training highly esteemed individuals who show the desire to change nations throughout the world.  The organization is seeking to bring global awareness by strategically helping nations to educate, train, and support the Nation Building Process, which is designed to improve the dignity and betterment of human life.  This international platform focuses on establishing effective relationships to help people understand the value of honor and basic human rights.
Posted by Ambassador Clyde Rivers at 1:35 PM No comments:


His Excellency Ambassador Clyde Rivers is an extraordinary leader of nations who believes in honoring others and to establish cultures of peace internationally by bringing back the lost art of honor. He is the Ambassador at Large for the Republic of Burundi. He is also Co-Chairman of the Congressional Prayer Conference of Washington, DC. He was appointed as a Representative of Interfaith Peace-Building Initiative to the United Nations office in New York and the African Union., as well as a Golden Rule World Peace Ambassador. by Ambassador Mussie Hailu. He is also the Chief Chancellor of Education for United Graduate College and Seminary International.

Ambassador Dr. Clyde Rivers is a great man of honor, integrity, and character who exemplifies the Golden Rule and is an inspiration to all of us by inspiring us to be the very best. He is an extraordinary global leader, a great visionary, an amazing role model and he is the voice of change to create a better tomorrow through empowering leaders globally.

He is surrounded by a tremendous, extraordinary team. Dr. Brian Williams who is a great leader with a great vision. Also, Dr. Donella Pitzl, Dr. Michal Pitzl, Dr. Robin Lococo, Dr. Reuben Egolf, just to name a few who are a part of his leadership team. They are great role models, great leaders and are making a significant impact. There are other statesmen who are part of the IChange Nations™ (ICN) family making an international impact through empowerment.

The mission of ICN is to bring back the lost art of honor by building a culture that recognizes individuals throughout the world who have accomplished extraordinary humanitarian efforts to bring change to nations. Dr. Clyde Rivers believes in giving honor to others and creating that culture because every individual is valuable. By creating a culture of honor we will create peace because we believe in the Golden Rule which states that one should treat others as one would like others to treat oneself. Golden rule initiative is the initiative of peace. When there is peace then there will also be prosperity in the economics of the nations.

As an ICN trained Statesman, I was given the distinguished privilege to go to Grenada in February 2016 along with Dr. Charles Karuku to honor Senator Winston Garraway. We also met with Dr. Right Honorable Prime Minister Keith Mitchell of Grenada, Hon. Senator Winston Garraway, distinguished members of the Government, influential leaders and given the opportunity to speak to the great people of Grenada.

On behalf of Ambassador Clyde Rivers, we honored Senator Dr. Winston Garraway with the prestigious Honorary Doctorate of Humanities from the United Graduate College and Seminary International. He was also honored with the prestigious Golden Rule International Award and designated as the Golden Rule Goodwill Peace Ambassador.  It surely was an impactive trip to Grenada. Dr. Karuku and I left Grenada making a positive difference, creating a culture of honor in Grenada and representing Ambassador Clyde Rivers and IChange Nations™ well.

It surely is an honor to be a part of IChange Nations™ and to touch nations and impact lives by bringing back the lost art of honor. Also teaching others how to effectively communicate, build healthy relationships and create cultures of honor through teaching, living and practicing the Golden Rule ethic.
________________________________________

Dr. Eric Melwani is a Golden Rule World Peace Ambassador and a Statesman with IChange Nations™. He travels around the world with the message of the value of life and the Golden Rule. He also pastors the Church of Many Waters in Orlando, Florida with his wife Dr. Janet Melwani.

Posted by Ambassador Clyde Rivers at 1:30 PM No comments: